Cycling routes through the suburb and to schools

In 2020 there are no published cycle routes in Deakin. Dark blue are principal routes on ACT Govt active travel map. Pale blue are ‘Main intended’ routes.  Perhaps we should seek a commitment from candidates in the 2020 ACT election for their construction 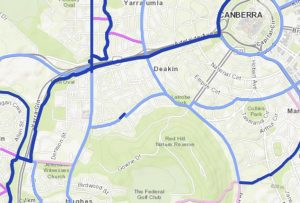 A survey conducted last year by the DRA identified the following cycling issues as important:

Australia’s peak cycling organisations are calling on governments to capitalise on a surge in lockdown-induced bicycle sales by fast-tracking the construction of all 750 km of planned bike lanes around the country, a move that would promote physically distanced commuting while taking “tens of thousands” of cars off city roads. Such a move would promote social distancing, take thousands of cars off roads and make it safer for riders.