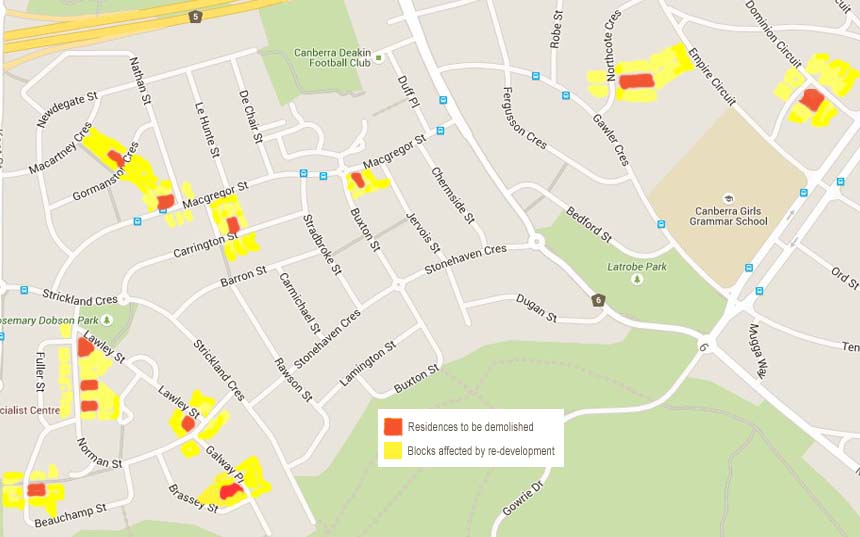 On 1 July 2015 the ACT Government’s Asbestos Remediation Taskforce published the full list of addresses of residences that it intends to demolish, on the grounds that traces of “Mr Fluffy” loose-fill asbestos may remain in the building, and that no safe level of contamination can be agreed.

Twelve residences in Deakin are on the list. DRA extends full sympathy to those residents who are being forced to re-locate, some at considerable personal cost. Under the Government’s policy, the blocks will be redeveloped under new lease conditions set up by a special variation to the Territory Plan. Departing residents will have no control over the future of their blocks, unless they are able to buy them back after remediation is completed. Since the the Government’s intention is to increase the value of those blocks by permitting dual-occupancy development, most current residents expect to be priced out of any buy-back opportunity.

Remaining residents, and particularly residents of adjoining properties, are legitimately concerned about what form of re-development will occur on those blocks. In Deakin, all but one of them are zoned RZ1, meaning only single residences are permitted. The special Territory Plan Amendment will alow subdivision of those blocks for dual occupancy, and thus change the character of the neighbourhood to some extent. The process is likely to be extended over at least five years.

DRA is monitoring and representing resident interests on this matter, and welcomes comment and participation from any resident. Better still, join DRA to show your support.

For your reference, we list below the 12 Deakin addresses published by the Government, and a map showing locations of adjoining residences potentially affected by the demolition and redevelopment.