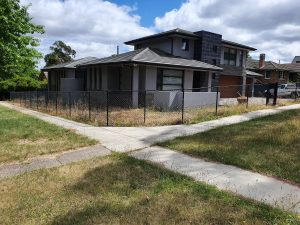 Another trend is the ugly front fences are increasing in Deakin rather than hedges.  The rules state that you will need development approval for a fence between a privately owned property and unleased Territory land (including areas such as parks, reserves, public access areas, street frontage, a laneway and other landscaped buffer areas) unless exempt from requiring approval. All fences are built and maintained at the cost of the private property owner.

Approval is not required for: 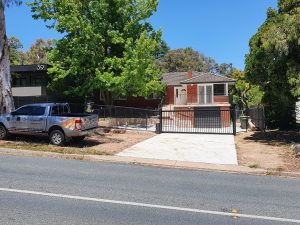 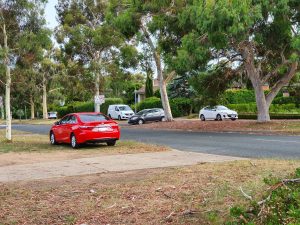 One of DRA’s main objectives is to maintain the garden city landscape in our suburb.

We note that parking on the nature strip is illegal under the Australian Road Rules (1999) and infringement notices can be issued. 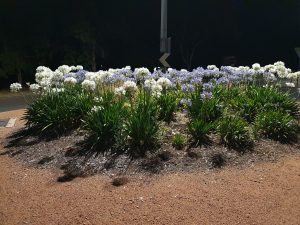 The Agapanthus on the Hopetoun – Stonehaven roundabout are looking good, but the flowers at the shops are definitely past their use-by-date. We need some volunteers to finish the weeding. With a little support from Deakin shops, restaurants and other businesses, we could prepare a flower display in the autumn. 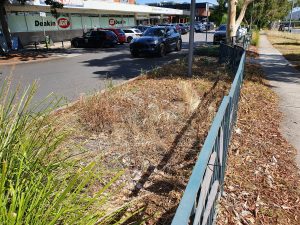 If you are able to provide a hand could you reply to george.wilson@anu.edu.au and we will search for a date? Alternatively, you might like to make a donation to cover the costs of materials.

One of the oak trees also needs attention and we will approach the ACT City Services to attend to its maintenance.

Notice of  meeting on the evening of 14th February 2023 at 7:30 pm Yarralumla Primary school. This will be a joint meeting with YRA/DRA in conjuction with the ISCCC  .

To help you understand some of the issues, here is a link to the CPAG 12/22 newsletter.

CPAG includes a number of planners and is an independent non-government body.

At the link, you will find notes prepared for the ISCCC on issues that are relevant to the Inner South in relation to development applications.

The executive of DRA and YRA met Senator David Pocock on 5th Dec 2022 to discuss light rail, ACT planning and seaplanes on the Lake.

During the meeting, we raise the following points.

A. The National Capital Authority which is a Federal government agency is failing not only its responsibilities for areas under its direct control in the Parliamentary Triangle but its role in oversighting the planning for the whole of ACT as the national capital.

In regard to the light rail/tram stage 2, The NCA failed to ask for a cost-benefit analysis of alternatives.

B. In regard to the yet unapproved Stage 2b, we believe that:

C. In regard to proposals to conduct float plane services from Sydney to the lake, we wondered if the operation could be conducted on cloudy days. An instrument approach through cloud to land on the lake seems unlikely. With a limitation like that would regular advertised services be possible?

DRA has written to the Minister for planning and the National Capital Authority in the following terms complaining about the inadequacy of the information and the opportunity to comment on the proposed redevelopment of the Art Gallery site and Grey Street. 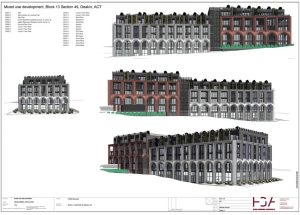 This post is in relation to the inadequacy of an online information session held by Canberra Town Planning on 13 December 2022 about a proposed development on Block 13 Section 49 Deakin, the Grey Street Art Gallery site. The session was billed as a ‘virtual information session’. The session was not widely advertised in the suburb. For example, we understand that residents of the Ambassador Apartments immediately across the road from the proposed development were not informed. As far as we know there was no mention of social media platforms and the consultation not delivered in a form that would allow many local residents to attend.

The Deakin Residents’ Association (DRA) did pass information about the event to our members and to our contact list, but one reported that although they had expressed an interest in attending they did not hear back from the organisers.

We had expected that this session would be conducted by the proponents as a ‘consultation’ with Deakin residents, but as a consultation session, it was utterly flawed. The introduction was brief, few plans were shown, there were initial mistakes in critical information (numbers of residential units/number of storeys) which were later corrected and there was completely inadequate information on the major issues that would allow residents to make any judgement at all about the scale of the planned development and its potential impact on the suburb. The drawings did not even represent the likely final look or even colour of the building. Many questions were answered with the words that it was a ‘work in progress’. This included the architecture, landscaping (no landscape plan was provided), on-site resident and visitor parking, planned numbers of units, likely number of residents, what would be on the ground floor and concerns for the adjoining school.

We understood from the Zoom session that the ‘consultation period’ ends on 16 January. However we consider that the ACT Government and NCA should not accept the outcome of this session as satisfactorily meeting requirements of ‘community consultation’. If this development goes ahead it would be a massive building, on a controversial site, alongside heritage significant Adelaide Avenue (a Main Avenue and national processional route) and at the ‘gateway’ to Deakin, a significant Garden Suburb. The DRA does not oppose redevelopment of the site but given its strategic significance for both the whole of Adelaide Ave and the suburb of Deakin, we urge greater sensitivity in its planning. We also note that it is a small site and its location presents challenges for access for both vehicles and pedestrians.

In our view, at the very least there should be an on-site consultation session with detailed plans and correct information, with proponents available to answer questions and this session should be widely advertised by the proponents to Deakin residents through letter-boxing, posters at the shops and on accessible social media. 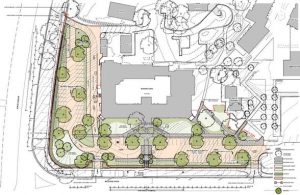 During the break, the CGGS Maintenance and Grounds team will work with external contractors to improve lighting and safety, enhance traffic flow, and improve the frontage of the School.

As they approach their Centenary in 2026, the School says that during the upgrade it will continue to honour its heritage and history throughout the upcoming works and any works in the future. While working to upgrade the southwest corner of the Senior School campus, the team will plant 39 new trees, create new open spaces, and implement significant soft and hard landscaping taking inspiration from the historical photos of the School to respect its heritage.

As a part of this project, the school’s maintenance team with the assistance of experts and in accordance with the Tree Protection Act 2005 and approval of the ACT Government, have identified several Cyprus trees aligning Melbourne Avenue and Gawler Crescent – many of which have fallen in storms recently – requiring removal.

The major works will be conducted from early December through to early March. The school does not expect that these works will have a major impact on the public, however, for a short period the footpath on Gawler Crescent may be closed with alternative routes provided by ACT Government.

Jeremy Hanson MLA has set up an online petition so that people who oppose the tram can support the case to stop it. It reads:

This petition of residents of the Australian Capital Territory draws to the attention of the Assembly the following:

Your petitioners, therefore, request the Assembly to call on the Government to:

The link to this petition: Stop the tram (jeremyhanson.net)

DRA is forwarding this opportunity so its members can respond as they decide and if they support the petition.

Emma Davidson MLA, Minister for Veterans and Seniors and Member for Murrumbidgee will make a presentation by video – Bridge Club Deakin on the Age Friendly Planning Strategy.
Join us on Wednesday 9 November 2022 from 6pm

She will be followed by Prue Power AM, Chair, Ministerial Advisory Council on Ageing, who will speak on the Age Friendly City Plan. All welcome.

The AGM for the DRA will follow. Notice of 2022 Annual General Meeting and Agenda, Nomination form to join the committee
You can join by ZOOM
https://us02web.zoom.us/j/83978282419?pwd=WXUxL1QwNFZlMnJMSlRVWWhacDY1QT09

Email vicepresident@deakinresidents.asn.au before the meeting for the passcode

On 12 September 2022, The Planning and Land Authority, ACT Government, approved the Development Application submitted by the Anglican Church on 11 November 2021.
On 16 September 2022, the Decision was made known by email to those who had made representations.
The attached Page 1 of the 16 Page Notice of Decision, gives approval for:

Variation of the Crown lease to permit child care centre, at Block 01 Section 30 DEAKIN, in accordance with the plans, drawings and other documentation approved and endorsed as forming part of this approval.

A copy of the application and the decision are available for inspection on the Public Register.
The Register can be inspected between 8:30am and 4:30pm weekdays at Access
Canberra Customer Service Centre, 8 Darling Street Mitchell, ACT.
If, however, you would like a copy of the full Notice of Decision please send an email to: davisgill@yahoo.com a copy of the Notice of Decision will be sent to your email address.

Representations in relation to the Development Application were submitted in December 2021 by the Deakin Residents Association and several nearby residents. The issues raised in these representations, especially in relation to parking and traffic flow, have seemingly had little or no impact on the decision to approve the Proposal.

A review of the decision can only be made through the ACT Civil and Administrative Appeals Tribunal (ACAT). An Application Form together with the required fee has to be lodged within 28 days.