DRA continues to be concerned about the growing expense of the Light Rail proposal Civic to Woden compared to the benefits of alternative options such as electric buses and improved cycleways.  Since it is some time since the last round of election promises, we would be pleased if the ACT Government could remind us again why we are doing it? We believe that Stage II is too expensive, slow, locks the ACT into outmoded technology. Its construction is disruptive, will cause more pollution than is ever likely to be saved, and damage major heritage values of the Parliamentary Triangle.
We said so in a 2018 submission to Parliamentary Inquiry by Joint Standing Committee on the National Capital and External Territories. It was supported by DRA survey results at the link.
In July 2019 we proposed that the matter was so serious, and of such national importance, the proposal should be the subject of a full Public Inquiry under the Commonwealth EPBC Act. We still hold that view – EVEN MORE STRONGLY. The Inquiry would consider the whole project, and the detail that impacts Adelaide Avenue which is a responsibility of the National Capital Authority.

DRA would like to congratulate the Red Hill Regenerators for winning the 2021 National Landcare Community Group Award. Since 1989 the group has been on the Reserve, weeding, planting, and counting in an excellent combination of commitment, deep knowledge and broad experience. Thanks pass to Michael Mulvaney RHG founder and guru who continues to inspire and guide the Group under the Presidency of Ross Kingsland. Their work is especially well regarded by the Deakin community as we take intense appreciation of walking on Red Hill during the Covid lock-down.

The Red Hill Regenerators work closely with the ACT Parks and Conservation Service and involve many other groups including local primary and high schools, Scout groups and businesses.  The reserve is an educational resource and the RHG host visitors on guided walks, developed interpretive signage and distributed educational brochures to neighbouring communities.  More details at http://redhillregenerators.org.au/

In lockdown we are valuing our open spaces even more. DRA remains interested in supporting a subgroup  – Friends of Latrobe Park to initiate change. Let us know if you would like to get involved.  It would:

Our flowers at the Deakin shops are going well although the bulbs in the Macgregor St beds are slower emerging. We have been advised by Floriade experts not to worry too much as different bulbs flower at various times. 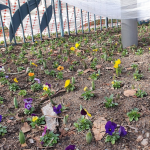 The Floriade Head Gardeners recommend we fertilise every couple of weeks with natural fertilisers like kelp, Seasol or anything fish-extract based to promote plant growth. They also recommend we pinch the flowers out of the pansies now to encourage them to flower later. However this is difficult because of the netting, which is needed to keep the cockatoos from digging up the bulbs.  More material at the link. Due to the lock down, we are unable to do these things as a group but maybe individuals en route to the shops could do a bit. IGA, Fitness First and Double Shot have been particularly helpful. Their support will be more important as we weather warms and watering becomes necessary.  IGA has supplied Seasol which is available to spray on flowers.

In July, the ACT Gov EPSDD approved (DA 202138388) proposing excavation and preparing the Equinox site on Kent site to support construction of a basement included as part of a design and siting application (DA 202138277) for a development of Equinox on Kent Street. However, it was recommended that works not to commence on site before the other two DAs are approved. We continue to watch developments on Kent Street. The two other applications are:

Traffic chaos is the current plan for Civic, with flow along Commonwealth Ave to be reduced by 80% and various other permanent road closures from next year.
There is a “virtual” information room up on the web site at  https://www.act.gov.au/lightrailtowoden
DRA believes all Inner South residents should read the information on the web site and complete the online survey on the social / economic effects – the link is click here
There will be a major consultation exercise starting September with the release of a number of reports on social and environmental impacts and other matters – the release of the survey results will be part of this.
The restriction of capacity across the bridge will apparently begin from mid next year.  The clover leaves, the ramp from London Circuit to the Southbound Lane of Commonwealth Ave and the section of London Circuit from Constitution Avenue to Edinburgh Avenue will also be closed permanently at that time.  Explanations have been lacking why this all has to happen next year or why the Southbound ramp (on the opposite side to the proposed light rail route) has to close at all.
DRA believes the current plan couldn’t have been devised to create more pain.  The 80% restriction is expected to last for several years and the road closures will be permanent.