DRA is concerned that proposed intensification of our suburb is not compatible with the Garden City. The experience of Inner South Canberra residents is that intensification nearly always involves reduced tree cover, loss of gardens, and increased coverage of blocks by buildings. Re-development in Canberra is messy, not properly regulated and results in loss of privacy, traffic problems and infill which is not acceptable to neighbours. It drives up the rates for nearby properties and puts pressure on services 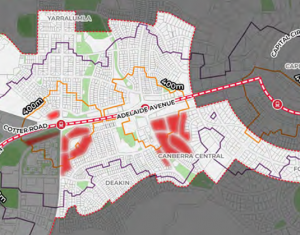 The red zone is to be subject to intensive development with increased building heights. The orange and violet lines enclose the area from which customers are expected to walk to the Light Rail stops.

The major finding of the Mecone report is that the “existing planning framework under the base case scenario, has significant capacity for growth” and “could already support an increase in 23,800 dwellings”. It says that the need for catalytic changes in the planning controls in the Study Area is not considered critical when purely considering the capacity for growth that already exists. If this is so, why is there a need to increase densities?

The Mecone report, developed in consultation with the ACT Government, admits that intensification will need additional enabling infrastructure but that this was not within the scope of their study. Thus, the consultant has not taken into account the cost of upgrading water, sewage, electricity, schools, transport etc in Inner South Canberra suburbs.

Inner South Canberra (including Deakin) residents have previously made it clear in both the ACT Government survey (Places and Spaces Survey 2019) and in the ISCCC 2019-20 Inner South Community Values, Interests and Concerns survey that they strongly support single detached dwellings and want housing to be no higher than two storeys and low density. They want to retain leafy low-rise character and decrease high density apartment development.  Some 54 per cent of respondents to the ISCCC survey have concerns about planning development.

The Mecone report, on the other hand, proposes increased heights in West Deakin of 4-6 storeys, but avoids a specific statement on what their recommended intensification means for the rest of the suburb. Nowhere in the report is the “Garden City” concept mentioned although the report does recognise that green spaces and the large canopy trees are highly valued by the Curtin community (this is not mentioned in commentary on other suburbs!). The Mecone report also assumes that residents will be willing to walk 800m to catch the tram. This is wishful thinking. Studies in other cities suggest that 250m is the upper limit.

Australian studies have concluded that zoning for higher density has increased house prices (and have had other undesirable impacts). [2] In other words, intensification makes housing less affordable. The benefits of intensification have not been demonstrated by Mecone or the ACT Government. Claims of “greater efficiency” have not been supported by any evidence.

The DRA Committee recommends that residents write to MLAs voicing their opposition to intensification of Inner South Canberra. We suggest that you urge our representatives to publicly state that they reject the recommendations of the Mecone report.

Deakin is in the Murrumbidgee electorate. MLAs representing us are:

The postal address of the Legislative Assembly is: GPO Box 1020, CANBERRA ACT 2601.

[2] See Limb and Murray, 2021, We zoned for density and got higher house process: Supply and price effects of upzoning over 20 years, QUT Working Paper, accessed on 23 May 2022 at https://eprints.qut.edu.au/209104/ and also see the references cited by these authors