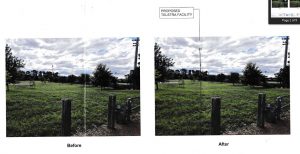 A telecommunications network base station facility is proposed near the southwest corner
of Deakin Oval. The proposed facility will replace an existing light pole, with the
existing lights to be relocated onto the new monopole.  More details at www.rfnsa.com.au/2600028

The proponents have invited comments on the proposal byFriday, 18th March 2022.
Send to  submissions@bmmqroup.com.au

Residents are concerned about:

In comparison with the existing telecommunications tower in the south-east corner of the Deakin Stadium Oval, the proposed Telstra tower presents an even more intrusive and invasive visual blight as it is located right in the centre of the public park in full view of residents in an aged residential village (The Grange), public housing, townhouses, apartments and house blocks.

Has consideration been given to locating such telecommunications equipment elsewhere in the area, for example at the top of Red Hill, where its impact is further away from residents, and the height of the tower would make it more effective?